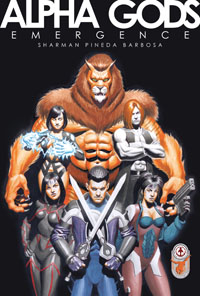 Reprinting the long out of print original Alpha Gods graphic novel with 16 pages of all new material, including rare pin ups and an article on the influences that inspired the book by series creator, Ian Sharman. Launched at the London Super Comic Con, Alpha Gods: Emergence is now available to order direct from the OUC Store. Get your copy now as they’re sure to sell out fast!

“The Alpha Gods’ first mission sees them taking on an ancient evil, Malak. He is a Nephilim, an ancient race that was spawned when fallen angels mated with human women. He’s seeking a way to bring his “fathers” through to our world, and only the Alpha Gods stand in his way.”

Editor In Chief, Markosia. View all posts by Ian Sharman

Orang Utan Comics is a creative collective run by Markosia’s Editor In Chief, Ian Sharman. We function largely as an imprint of Markosia and exist to promote the various projects that members of the collective, both past and present, are involved in.